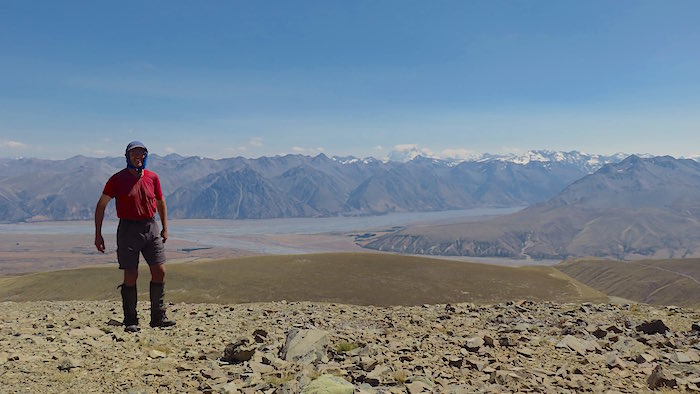 “Walking, ideally, is a state in which the mind, the body, and the world are aligned, as though they were three characters finally in conversation together, three notes suddenly making a chord. Walking allows us to be in our bodies and in the world without being made busy by them. It leaves us free to think without being wholly lost in our thoughts.”

Rebecca Solnit from Wanderlust: A History of Walking

The joy of a long trail like Te Araroa, an adventure that lasts weeks, or months, is that you can shed all the modern world’s distractions, expectations and responsibilities.

For much of the journey there is little in the way of standard civilisation, or even cell phone connectivity. You end up being transported back in time to when life was more immediately appreciated.

Concerns are basic: getting up and eating breakfast, walking for much, or little, of the day, setting up your tent, eating the food that you carried, not so much else.

Oh, maybe talking about Life, Love and Meaning with like-minded strangers. For some reason the other long distance walkers you encounter generally seem happy, grinning and ready for a chat.

You can step back from the usual frantic level of activity in life, take stock, and concentrate on basic and timeless things, and realise that not so long ago this was what existence was like for most people, before distractions turned our lives into a blur of sensations.

You have the opportunity to notice time passing slowly. You can pay attention to things that would normally be drowned out by the background noise of Life in the Big City: the sound of raindrops, or wind, the changing clouds as they move across the sky, the taste of your food, the smell of wet forest, the Full Moon rising, the sound of birds in flight, or song, the crunch of your footsteps, your breathing, the beat of your heart.

You can find a true balance between action and thought.

Plenty of action. Lots of thought.

Having the time and space to find some perspective for your life, that is a treasure.

The full 2996 km length of Te Araroa is a mega commitment.

That’s setting aside about four or five months and hiking from the northern-most point of the North Island, Cape Reinga, to the end of Highway 1 at Bluff, somewhat near the southernmost point of the South Island. And mostly following backcountry tracks with few other people around. You might only come across a handful of trekkers in a week in the more remote sections.

How about just the 1309 km of the South Island?

That rates as only huge.

Depending on the enthusiasm level 70 – 90 days needs to be set aside for the South Island section, that allows for an average of around 18 kilometres a day, and includes maybe seven rest days, heading off the trail to pick up food parcels, a bad weather allowance and general contingencies, like just not wanting to move.

That length of time allows full immersion, getting lost in the experience.

There’s a strange paradox with such an extensive period of time removed from civilisation.

On one hand, there’s a specific route with a final destination, to allow an overall sense of purpose and structure to the weeks on the move. And settling into a predictable routine of the day’s usually repetitive events: wake, eat, walk, camp, eat, sleep.

On the other, the actual days can be arranged as you choose, how much time to spend walking, where to stay, how much effort to put in with people you meet along the way.

Within fairly rigid parameters, including lack of communication with your family, friends and the remainder of the world, it ends up you have surprising freedom. In fact, the constraints create the freedom.

Many would think that sort of distance, less than 20 km a day, would be easy enough to achieve, even double that may be possible, but overseas trail experience doesn’t immediately translate to New Zealand conditions. The trail turns out to be significantly more arduous than you might imagine, plenty of up and down, and the track, particularly in the tussock, is often little more a faint hint than a fully benched and manicured track like New Zealand’s more highly used Great Walks, or the named trails you often find in other countries.

Walking the length of the South Island gives an appreciation of how the landscape is put together: the rugged Richmond range in the north, extensive beech forests, mountain lakes and passes, major unbridged river crossings, the tussock lands further south, Lake Tekapo, Pukaki, Ohau, Hawea, Wanaka, Wakatipu, Mavora, etc, the Takitimu Range, the south coast, and everything else.

Oh, this sounds a little too earnest.

You get to have a Little Adventure, and a barrel of fun.

No question, Te Araroa is a challenge of epic proportions.

This is an extract from the book I am currently working on called, err,

I recount my thoughts and experiences when I walked the South Island section of Te Araroa, from Bluff to Ships Cove in the Summer of 2015. Oh, and there were 16 days getting as far south as is sensible to walk in New Zealand, down on Stewart Island/Rakiura, as a pre-amble.

The book is based on a blog found on tramping New Zealand website.