has now been published as a paperback by bluelake publications. It is available from Amazon.

If you live in NZ please use the contact page with your contact details, and after payment, $NZ25 + $NZ5 postage, that's $NZ30 in total, a signed copy will be posted direct to your home!

Here's eight other ebooks for your reading pleasure, with links to Amazon where they can be purchased.

There's four tales from my bike touring expeditions and four from tramping/bushwalking.

These ebooks are heavily based on various blogs from the websites tramping.net.nz and cycletrailsAustralia.com but the writing has been extensively rearranged, edited and new linking passages have been written. You can read them for free on the actual blogs but if you want the free standing version to read anywhere you can download them. 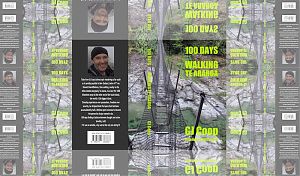 100 Days | Walking Te Araroa answers the fundamental question: Why is a long break away from Civilisation, allowing the re-calibration of Life, important to long term well being?

Oh, it is also a day to day account of a true New Zealand backcountry tramping Little Adventure.

The Last 100km is the Hardest | ebook

This trip is the final 2% of a series of five long distance bike tours following my realisation some time ago that without much in life’s Commitment Department — my relationship had spectacularly combusted and longstanding jobs were nearing completion — there was a decision to be made: migrate back to New Zealand, or, end up in Oz permanently.

The Last 100km, Bike Tour The Fifth, is the tale of a slow, meandering, bike journey from Auckland to Nelson in New Zealand and some thoughts about the reasons for bike touring in general, and what it means to return home.

Just to set the scene, the Munda Biddi Trail is a mountain bike trail that starts 35 km north east of Perth and at the time headed south for 497 km, as far as the small town Nannup. Yes, it’s a roller coaster and cuts through some surprisingly uninhabited territory, considering the proximity to the 1.6m population of Perth.

No traffic. Big jarrah tree forest. Free accommodation. Big watertanks. Not many, often make that no, others on the track.

Nelson to the Lewis Pass | ebook

My tale of tramping what is commonly known as the Alpine Route, ie, Nelson to St Arnaud in the top bit of the South Island in New Zealand. The full 140 km of tree roots and windswept tops. Hugely scenic, inspirational, but lacking in the companionship side of things.

Then, with the weather forecast predicting a continuation of the sublime weather, after re-stocking the supply levels, the trek continued through the Nelson Lakes National Park to the Lewis Pass. Nice, hey.

A 14 day solo tramp could well be the full meditation on loneliness, setting out to the more remote sectors of Nelson Lakes National Park, knowing the full unlikelihood of encountering too many others in the travels at this time of the season, ie, mid autumn.

The North-west and Southern Circuit combined tracks end up being quite the challenge, primarily because of the distance, 181 km by my reckoning, together with the need to trudge burdened, at least initially, with a food load for the complete journey, a couple of weeks perhaps, that weather, you get plenty of it, and, for some anyway, the perceived isolation.

Let’s face it, there aren’t many places on Earth, like standing on Doughboy Hill, ie, a bump on the ridge between Doughboy and the Rakeahua valley, where you can look south over to the vast and empty of humanity Tin Range, and realise you might be the last person between civilisation and Antarctica.

Yeah, this is truly an expedition to the perimeter of the inhabited world.

This ebook is observations from a 13 day walk of the Larapinta Trail, a 223 km walk straight out west from Alice Springs in Central Australia. I however managed just 132 kilometres, albeit the more scenic parts, and bearing in mind I’d previously acquainted myself the most spectacular, and final, section a couple of times, climbing Mt Sonder.

The return intercontinental bike voyage was planned in three stages.

Part One: drop down from Perth to Vale Leeuwin the south west extremity to Australia.
Part Two: a diagonal slash through the heart of the landscape to Cape York, the northern-most point.
Part the Third: Drop down to Wilsons Promontory, the southern point.

My first 65,000 word ebook is the product of a 464 day blog from my initial east to west crossing of the Australian continent on a bicycle.