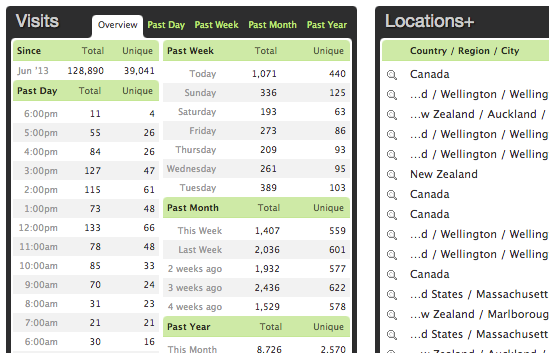 Two French Canadians, Étienne Lemieux and Louis-Vincent Lessard, were recently discovered to be missing when they failed to arrive home from a holiday in New Zealand. Their movements were retraced and it was found that they had not finished walking the Kepler Track that they had started on the 7 July.

Yesterday their bodies were discovered nearby the Hanging Valley Shelter, they had been swept away in an avalanche.

My documentation of the Hanging Valley Shelter is the best in town and it has received a pummelling from Canada today. My hits have been usually around the 300 mark, dropping somewhat lower in mid week in the winter. Surprisingly consistent actually.

Today the website received the biggest number of hits for a single day, 1200.

It’s sad that it has come due to these circumstances but it is good people have some information about the area where the blokes perished.