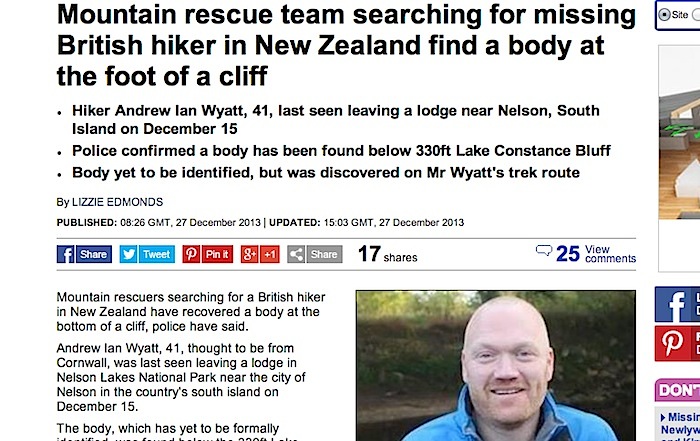 the sad case of Andy Wyatt

A couple of my photos have appeared in the famous tabloid Dailymail in an article about the sad case of Andy Wyatt — heading to Caroline Creek Bivvy over Waiau Pass, he fell 100m over a cliff just after leaving Blue Lake Hut.

I followed his story when it was announced he was missing in Nelson Lakes National Park before Christmas. They found him three weeks later.

Anyway I finally received my payment of $120 which has just appeared in my account, think it might go towards a personal locator beacon . . .

[Edit: later . . .
I’ve seen Andy’s name in a few hut books when I wandered over the Alpine Route up behind Nelson in March/April. He seemed to have covered a fair territory and some of it like Mt Rintoul and Hopeless Creek isn’t beginner’s terrain, most of it solo. He had a very messy writing style and seemed concise with his comments: usually scrawling “choice” or “awesome”. Later in April I followed his proposed route over Waiau Pass, the track had only very recently been re-marked, it’s easy to see how someone would try to descend too early and get bamboozled with the route. I was very glad to make it to Caroline bivvy that night.]