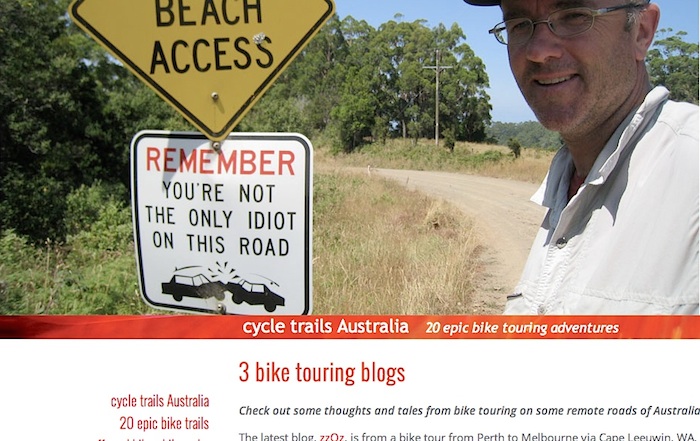 It started life as a daily blog on a personal website, created in Apple’s iWeb. The process was to write each day’s entry up with my 0.7mm mechanical pencil in an A6 spiral-bound notebook, out on the road, often sitting in a tent, at the end of each day, then, power and suitable seating allowing, transcribe into digital format on my MacBook.

Personally I find the I-got-up-and-had-breakfast-and-then-got-on-my-bike-and-had-a-second-breakfast-after-climbing-a-hill-and-then-I-stopped-for-an-icecream style journals rather uninteresting, chronicling the superficial in some detail. I’m happy to do that on occasions, but more usually, once I really got into the swing of writing, I ended up focussing on a single event, or person, or thought, during the day, but hopefully with some humour, or insight, or irony, ie, something slightly more substantial than just description. The idea was rather than give a day to day account of progress, instead to post a focussed explication on the major thought of the day in 150 to 400 words, there’s plenty of opportunity out there to think. (Missing from this ebook is the single best Image of the Day, “best” being a loose description that might include “the most informative”, “the prettiest”, or just to show “look-at-how-tough-I am-to-travel-out-here”.)

iWeb has long been discontinued, and rightly so. It was easy enough to learn, in typical Apple style, but it saved everything in a single long file that was prone to corruption, requiring in one instance to upload the full 1gig bundle from the backup. And I wasn’t trying anything particularly complex.

Then I found the CrazyGuyonaBike.com website, dedicated to hosting journals specialising in bike touring. The iWeb text was copied to this new site and my standard picture size was changed from 700 × 400 pixels for some inexplicable reason to the more postbox 1080 × 500, which has now become my signature size. The rationale was that the proportion mimicked standard binocular vision, ie, it’s close to what you see in the real world, and that the twin squares 500 × 500, ie, 1000 pixels, was slightly stretched to 1080 width, to avoid total perfection, kind of like the slightly-less-than-square board for the Japanese game of Go.

Consciously imperfect perfection, could be my personal motto.

When I arrived in Perth, after 464 days out on the road, I had decided to construct my own Textpattern website and the task of copying the text and uploading the photos from CG was undertaken. (Txp is a lightweight but entirely powerful interface that allows direct fiddling with the basic HTML. Once you come to grips with HTML and CSS there’s not much you can’t do, although it still hasn’t resolved how to cope with image sizing, then again the whole internet hasn’t got that sorted yet.)

Finally back in NZ I distilled the best of the blogs into a mostly chronological single file, eliminating any writing that wasn’t focused and adding linking passages with each chapter heading. The structure of the book was finalised and the prologue, preface, introduction, etc, assembled. This underwent various full revisions and was eventually printed out as a substantial draft, couldn’t call it a proof copy, as each page had substantial explications, or general revisions.

Eventually the completed, edited, proof was transferred onto a version of XHTML, .epub, to allow conversion into the virtually uneditable .mobi format used in Kindle ebook readers and the main format used on Amazon. The automatic export from Apple’s program Pages of XHTML is not the cleanest version, somehow 40 various XHTML classes were created where only six are actually needed, so more time was wasted on that cleanup.

Well, it’s not long before that final process is completed and I’ll have e-book creation properly understood.

Then comes the task of publishing the second e-book, zzOz, which has been at the proofing stage while I finalised Heading West. Should be easier the second time around albeit the zzOz will be weighing in at over 80,000 words, ie, real book length.

I am getting excited at the thought of being a published author. Finally.