Home » blog » I have been writing. Just not here. 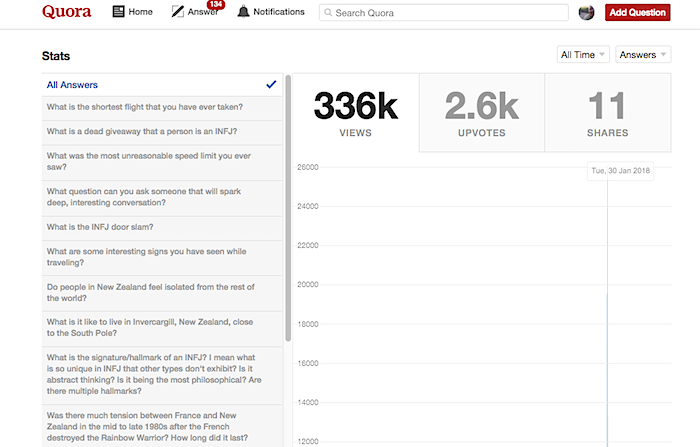 I have been writing. Just not here.

For a while I tried Google+, and that went well for a year or so. Particularly useful was the integration of images. I take plenty, and I was able to gain something of an audience.

Then something happened, not least an interface change that didn’t appeal to me. I stopped.

I tried medium.com, but was unable to gain any traction. It’s not much fun when you write something that you think is worthwhile, but there is just no audience.

And I discovered Quora.com.

My initial interaction was Googling to find the best cooking or frying oil. It didn’t take long to become hooked on Quora. I love finding random bits of knowledge about things, and also found subjects that I could write about. It’s enhanced my writing for the Internet skills.

You get immediate feedback, and it’s probably the largest audience a novice writer can find on the Internet.

After a year or so I muted, or at least unfollowed a number of prolific and more highly popular writers to allow few others to come through. I even muted the magnificent Dushka Zapata who has more than 100 million answer views.

I discovered some linguistics via the very readable Oscar Tay, English literature with Michael Masiello, and a couple interesting writers on animals: Stefan Pociask and Holly Root-Gutteridge. And I found I liked the viewpoint of Alex Johnston on music. Each of these people has a high level of knowledge in a number of fields, and more importantly, can write intelligently in a manner that works on the Internet.

And of course our own New Zealand superstar, Frances Meredith for those who like their humour full in your face.

But I should continue to update this blog. Expect more consistent postings.