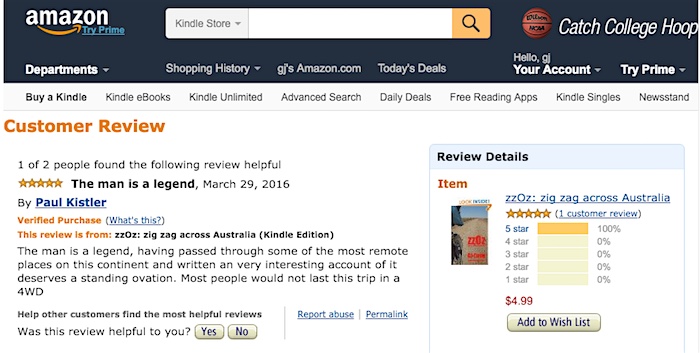 After more than a year I finally received my first review on Amazon, a big five star, from persons unknown to me.

Actually it’s my first ever review there.

The sales keep ticking along, very slowly, 25 a month. That makes it coffee money, I guess, but considering many people fail to sell anything after the initial hype at least it’s something.

Occasionally I read a blog posting about how to successfully promote your ebooks. I’m incapable of following the suggestions, basically requiring intense self-promotion for which I have little stomach. I’d like people to read what I write, but I’m reliant on discrete word-of-mouth rather than self-trumpeting.

My interest is in creation, not marketing and I’m perceptive enough to realise that these will never make a best seller list. They are quite different from other people’s books and have their own message that is quite different from what most of the people currently writing about, and my own idiosyncratic way of telling the story.

The books might not have the high drama, or heroics of other adventures but they have been the result of considerable effort, both in the experience of the Little Adventures themselves, and then the writing process. So many iterations, drafts, much revising.

100 Days of Tramping |Te Araroa started as a hand written journal in an A6 spiral bound notebook, then was dictated as a blog, expanded into an ebook, soon as paperback. Expanded from 42k to 101k words in the process.

At least I understand my limitations. My writing has not much in the way of narrative, not so many characters due to the mostly solitary nature of my travels.

They are comprised from vaguely linked chunks, delivered in a here-it-is manner, not so much build up, just here’s my observations, then I move on to the next thing.

The writing is very much of its time, no need to remember what happened as it’s all simply an agglomeration of discontinuous incidents.

I have a huge store of ideas in the seven years of writing on an almost daily basis, and it’s taken a while to work out my themes.

If I summed up the message it’s probably this: words for thoughtful people about how I attempted to create a meaningful life.

Feel free to add your own five-star review to any of my books up on Amazon.