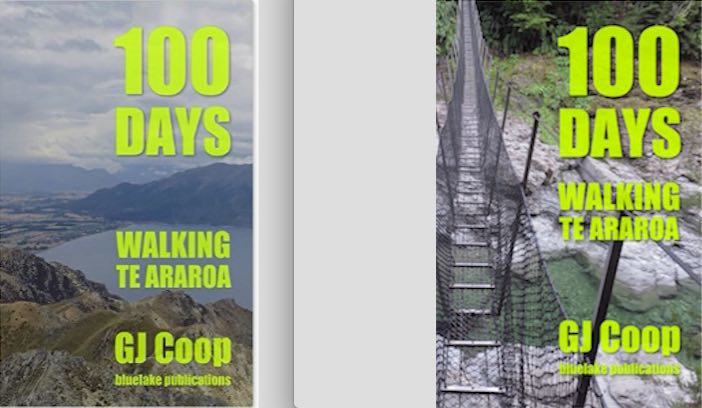 What might appear as endless dithering is the last minute finessing of a much considered work.

The idea with producing things for public consumption is to have every last aspect resolved, at least in your mind. So they can sit there for the next 20 years without need for further work.

I’ve finally thrown my work open to scrutiny by my friends, well, actually placed in front of them and the feedback has been useful.

The title changed first, it was confusing and the word “tramping” has an alternative, and not useful, meaning in the USA, a fairly large potential market. That had to change.

Then despite the grandeur of the original image the dull nature of the day rendered the image flat, requiring the over compensation of the lurid text.

I’m not worried about people directed to Amazon from my own website, they already have some idea of what to expect. The people I want to intrigue are those who glance at the thumbnail image in the list of recommendations after they have searched for something else. The image should stand out immediately and hint at what the book is about, despite being postage stamp sized.

There is little point in subtlety if you want sales. The image has to ring like a bell.

Of my books, Heading West sells the best. The title is understandable. The image shows a bike wheel and a dirt road. You know what it’s about.

That clarity translates into sales. This stuff is important. 100 Days hasn’t done so well, yet, and it’s a significantly better read.

There’s an image of a swingbridge on the cover now. That looks rather adventurous, but it’s not misleading people into thinking the book is about mountain climbing.

You might think the 20 to 30 book sales month is trivial, that’s in total across 10 titles, but considering the lack of publicity, it’s a start. 90% of people sell nothing other than a sporadic few to supporters at the launch.

It would help if I started getting some reviews, but eventually they will start to happen.

In the meantime my task is to get the product as good as I can achieve.